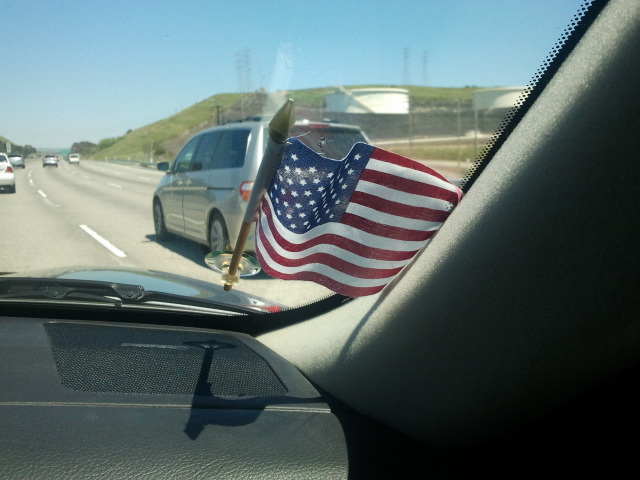 I left Wellington to Auckland not feeling much other than mild worry because this is my first trip to anywhere other than Australia. I didn't know what to expect or who I would meet but I hoped for the best.
Once I arrived into Auckland I was on my toes not wanting to make any mistakes, I was told through the planes PA system that a bus would be waiting for me and my fellow travellers outside the domestic terminal and it would take me safely to the International Terminal. Even so I still had to double check with the Air Hostess what it looked like in case I got on the wrong bus, she said "it looks like a forest" and she was right it was also labelled in shining orange letters "Free Transfer to International" So I doubt I would have missed it.
Once I arrived at the terminal it took me awhile to figure out what to do because my bags were checked in at Wellington Airport and I had my ticket so I followed the arrows pointing to International Departures. 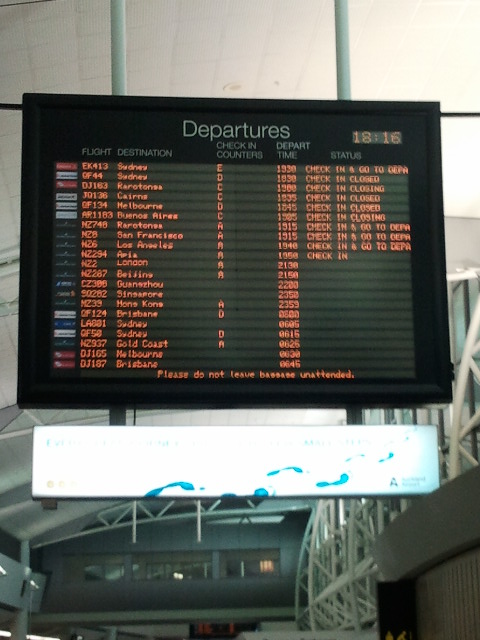 I stopped at the large sign that looms overhead giving all people information about their flights and it gave me flutter of excitement, my trip was begining!

Once I passed all the shops in the departures lounge I made my way to gate 6, where I panicked! What about departure tax! I saw a nice lady in an Air New Zealand uniform and told her my situation, she smiled and shook her head, easing my mind.
Once I got to the gate all I could see was people standing in broken Jigsaw lines so I just did as some countries do, made my way to the space that was empty and waited till I got to the boarding desk. Now I could relax and find my seat on this massive double decker plane. I've never experienced being on these planes except in movies where the plane crashes because of bad weather or snakes, not the best memories.
It wasn't too bad though and I did get to sleep despite crying babies and loud talkers (yay for earplugs!)

We landed on a beautiful sunny spring day and I felt my anxiety begin to start when I thought about the horror stories of American Boarder Control Officers, and whether my ESTA Visa went through properly. Imagine if I was turned away before I even started! Once I got to the desk it wasn't all bad, he asked the usual questions and I was more than happy to explain, especially when I said I'm on a mini OE and he looked at me like what is that?, I think I eased his mind when I said "I work for the Police Union, in the finance department"

After collecting my bag (thanks Mum and John for making it easy to spot!) I headed for the exit and was greeted by the affable Ken who is the partner of my Mothers Cousin Jessica. We headed for the car and the first thing I did was go to the passenger side, but! Its America and it was actually the Drivers side. "You driving?" said Ken said with a smile on his face. 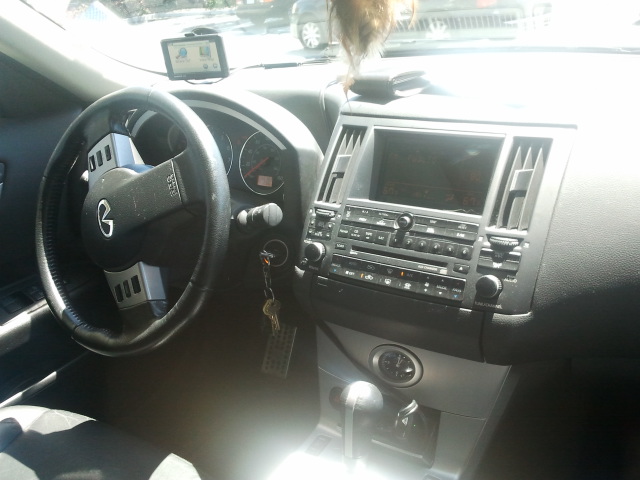 We headed for the hills (Jessica lives in El Dorado Hills) and it took 2 and a half hours to get there, Ken lives about 2 hours from Jessica so it sucks but thats what its like, later on in the evening I heard a lady telling two others that she commutes 2 hours every day to work and two hours back.

Once we arrived at Jessicas house I couldn't help but notice the houses all looked so similar but once you're inside you can see how they would all be different, Jessica's house was beautiful. It was so hot getting out of the car, it felt about 30 degrees!

Jessicas house is so lovely and she has decorated it very nicely with Kens photography all around and her paintings. I settled in and meet her cute, Ewok dog Biscuit and got changed into shorts and a t-shirt, then I tried my best to rehydrate after the drying flight and had a nap.

When I woke up it was 5 o'clock and dinner was ready, Jessica had made a yummy meal and I meet Jim who is a good friend of Ken and Jessicas and a real charmer. He had been to New Zealand and found my accent very amusing. I've never been the person who gets asked to say things because it sounds funny and I laughed but I could see how it would old after awhile. 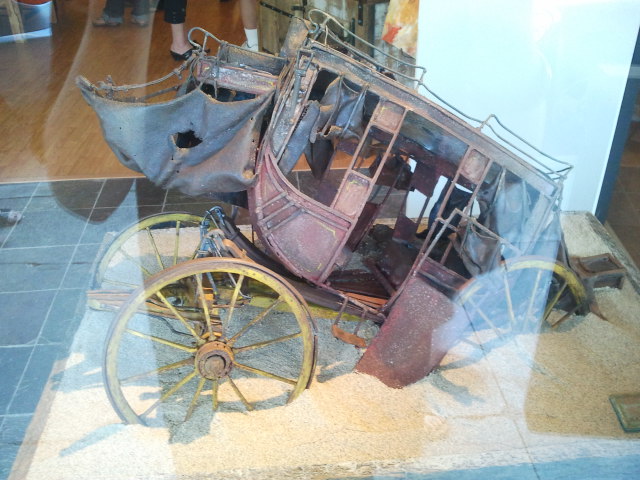 Once we ate we then headed to a little county called Placerville and went on what was called an art walk where we got to check out different galleries and a whole range of different art works. Sculpture, Mixed Media, Jewellery, Photography and Paintings were all there and it was good.
I met a few people there who picked up on my accent and one old guy who thought I was English. The area was so nice and the people were all very friendly, I had a great experience. We ended the night with sitting in a bar listening to a fantastic musician singing on guitar.

Overall my first day in the United States of America was a success!
Posted by Anna Gibb at 10:05 PM