Miss Pinup New Zealand and the Very Vintage Day Out 2013

Well, I've finally got the chance to sit down and reflect on what a lovely day I had on Saturday the 13th of April 2013 at the second Very Vintage Day Out and what a great experience the Miss Pinup New Zealand competition was for me personally.

First of all I would like to mention that I am the winner of the People's Choice Award and I really want to thank everyone who voted for me, especially those who shared the link for voting on their Facebook pages or their personal pages or in the case of one Amy their blog. Go check hers out at http://peonut.com/

Now I didn't bring my camera up with me on the day which now when I write this blog entry seems really dumb but I'm lucky enough to take photos from Facebook and the like and will use those making sure I credit the photographer.

The day began with a bad sleep, as all eventful days seem to in my life, I fell asleep around 2am then woke up at 5:30am and was not in the best mood but thankfully my excellent, caring mother was on hand to help. Can I say she is the most amazing woman and really made my day by bringing me food, coffee and lots of encouraging words especially when I was getting into my own head.

Once I arrived at the venue and met a few of the other contestants my worry dissipated and I was able to enjoy the day, The first thing I did was take a look at the stalls and after a few minutes wandering around I stopped at Black Betty's stall where I found the most stunning late 1940s Black dress. I need to take the hem down to cover my knees but it fit me so perfectly!

Unfortunately the one dress blew my budget for the day but I feel it was worth it because it's in such excellent condition.


Once I had looked around I went backstage to get ready for my performance, I asked to sing on the day and had three songs ready to perform. I am normally a good singer and feel confident on stage but for some reason today I was not singing well at all, I've had people tell me they thought I was fine but I heard it back and really want to say that I was not on my game and hope to impress you in future!

After performing I could relax so I was lucky enough to do a bit more looking around and meet some lovely people. A shout out is required here to Susie Ford of Agent Bluebelles Wardrobe, She was so friendly and sold me a long tulle petticoat which I can't wait to wear under my 1950s dresses to add more volume. I also spoke to some of her lovely friends including her boyfriend David and friend Brian.

I can't wait to purchase more goods from her when my bank balance has recovered!

After enjoying a wine and chat with Ria and David, Susie's boyfriend, Ria and I realised it was time to get ready for the Pinup competition so went backstage to be given the run through of events by Miss La Vida who was our charming MC for the competition.

I was so stressed about my hair that I didn't have time to do what I planned so instead I ended up with what you see below, by the way my dress was a brocade silk 1960s dress that I altered to look more 1940s/1950s and I was wearing a corset underneath so I had a 65cm waist!


Once the first part was over I could get out of my outfit and I had a bit of time to get into the right mood for performing. I didn't want to make the same mistake as I had in the morning which was to not go through the songs so that they were fresh in my mind. I was performing a song called Makin' Whoopee which was my second choice, the first was Straighten up and fly right but I wasn't feeling it during practise and I had sung Makin' Whoopee in a concert before.

This is where it gets sticky....

I got up to sing Makin' Whoopee but the song that started to play was Straighten up and fly right.

First thought was F**k, second was how can I fix this and third was lets just do an acapella song and hope it works out. So I busted out my tried and true Jazz song, Summertime, which by the way I have sung acapella at my Aunty's 50th, Friends 21st and when a keyboard couldn't get connected to a PA so I was not stressed when I sung it. In fact I felt really good because it's the kind of song I feel able to riff on and it's been done so much that people don't mind if you put your own spin on it. 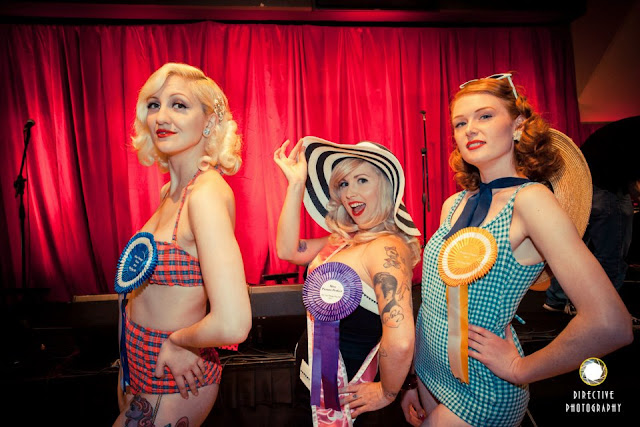 Well it certainly didn't backfire because lucky me, I got into the finals and then double lucky me I got People's Choice so all in all the competition didn't go too badly!

Congratulations to Ria Apsotolidis for getting Vintage Vixen and Honey L'amour for getting Miss Picture Perfect AND the grand prize Miss Pinup New Zealand 2013.

I think they were well deserved and I want to make a special mention of Miss Bettsy Rose Lee who also made it to the finals, She definitely deserved to make it to the finals and unfortunately didn't come away with a Rosette but I want to give her total props for handling it like a pro, especially because of the way they called out the prizes, It made you think she was going to get it and when she didn't I felt so happy for Honey but so sad for Miss Bettsy!

I hope she had a fun night judging the Miss Burlesque New Zealand awards and had a celebratory drink for being an awesome person!

See you all at the VVDO next year and Big love to the organisers for such a fun day!


Photo's supplied by Directive Photography and taken from Black Betty's facebook page. Cheers!
Posted by Unknown at 3:15 AM