Hi, sorry for the delay in posting! I've been too tired at night to get on the computer and have finally decided I better get something down to let you know whats happening.

I started off my journey to London with a late night and an early morning so it wasn't off to the best start, then I experienced delays at Newark airport so by the time I arrived in London it was about 8:30pm. I got off the plane with blistered feet because like an idiot I was wearing some new shoes, so I ended up using the sticker on my boarding pass and placing it over the blister. Good ol' Kiwi Ingenuity! Then I went to queue and man it was long!! Once I got halfway I realized I didn't have my customs clearance card to fill in so I had to leave the massive queue and go grab the card. Then I filled it in with all the information it required, with the exception of the address where I was staying which was with Mums Partners Sisters Penpal. I had been emailing Audrey but I forgot to ask for the address so all I knew was that it was in Croydon, which it was I put on the card. Once I got to the end of the queue I was tired, had sore feet and a sore back and I was wondering how I would get around not having an address!

Well the first thing that happened was the Customs man said "We'll need more than Croydon, UK for the address" and in my fragile state that was all it took for me to burst into tears! So here I was crying like an idiot while the customs officer tried to get information from me about who I was staying with and the reasons for my trip. Luckily I had the flight information for my trip and the EasyJet Boarding passes for London to Paris and Paris to Rome, so I could at least hand that over. He then said that he would need an address and I unfortunately couldn't give it to him as I couldn't even remember Audrey's surname! And even telling him how I knew her sounded ridiculous, I mean when you state the connection it sounds a bit dodgy!
So once my cry turned into the "Ugly Cry" and he had given me a warning about being detained and making sure I remember the address for next time he let me through to get my bags.

By this time it was 9:30pm and I hadn't been able to contact Duncan or get internet access, so I ran to get my bags but when I managed to figure out which baggage carousel was the one to go to I saw that it had stopped! So I went to the questions desk and saw my bag was the last one from the flight to be picked up, then zoomed over to the exit to hopefully see Duncan and Audrey waiting. Well Duncan sticks out from a crowd so I immediately felt relieved when I saw him and then standing next to him was Audrey and her Mum.
I then had another little cry and got a cuddle from Duncan which made me feel better, and I made my way with them to the car for a good nights sleep!!!!

So I had a lovely sleep in and was looking forward to checking out London and meeting up with my dear friend Kiera! Duncan joined us for the day also which started at midday as Kiera had a Job interview and we planned to meet at 1pm. Lucky for Duncan and I Audrey was able to give us a lift to the train station in Easy Croydon and then help us by letting us know what ticket to buy so we could get around London affordably.
Once we had figured out what train to catch (I asked one of the station attendants, Duncan was too chicken to ask! :) We made our way to London Waterloo which was where we were meeting Kiera. 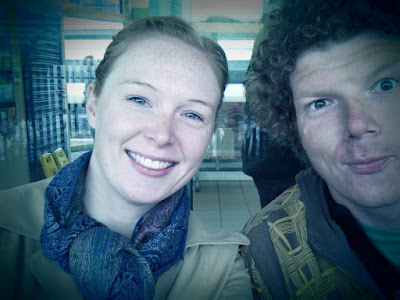 It was so nice to see Kiera, we had a great day checking out Trafalgar Square, and walking past the London Eye, then we went to the Camden Markets and I got into an argument with a lady at one of the stalls because I bought a ring and it broke after wearing it for about an hour. I think I embarrassed Duncan and Kiera, and later on when I had cooled down myself. Its cause I asked for my money back and she had this little sign in the top corner saying no refunds, only exchanges. 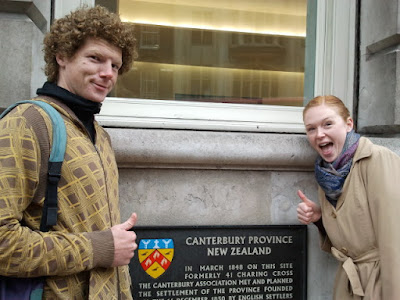 Once we had something to eat around 7pm Duncan and I left to go back to Audreys and Kiera went back to the hostel she was staying in.

I started off the day with a sleep in and was late to meeting Kiera which I am so sorry about!! Sorry Keira!!!
Duncan also came as he was going to be staying with a mate that night and had to go to the dudes work to get keys so he could drop off his backpack.
I meet up with Kiera whilst Duncan went to see his friend and she and I decided we would meet at the Victoria and Albert Museum. I had such a nice time there, the best part was the Jewellery Collection. It really brings out the Magpie in you! 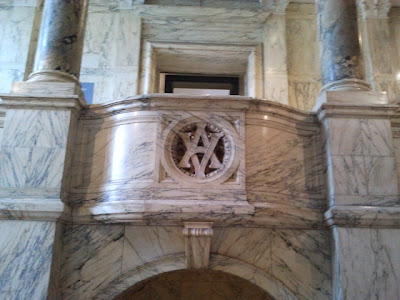 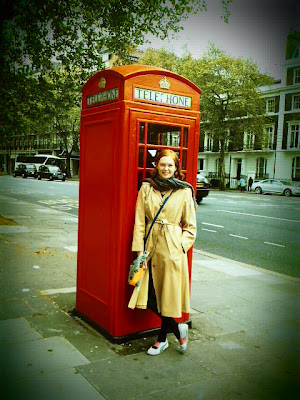 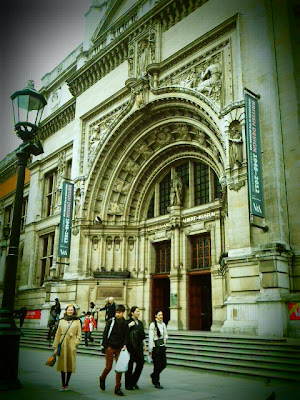 Kiera and I went for lunch and coffee and then caught the tube to the station where I meet up with Duncan and we both farewell-ed Kiera. Thank you Kiera for coming to meet me, I am so glad we could meet up!!

Duncan and I then went to the Tate Modern and queued for about 20 minutes to check out the Damien Hirst  Diamond Encrusted Skull on show for free. It was made with 8,601 Diamonds and is worth about 50 million pounds.

Once we had seen it I was getting really weary and wanted to get to bed so I left Duncan at the Tate and headed back to Audreys. I got off at the stop near Oxford Street and ended up in Primark on Bond Street which did renew my strengths somewhat so I left Primark with a lovely Skirt and some stockings! Its funny how rejuvenating I find shopping. I'm sorry Mum, I wish Art got me excited but alas I am not that way inclined!

Well I enjoyed myself very much on day 3 (Saturday) I indulged in shopping and got some nice buys from a couple of Notting Hill Thrift Shops, I also went to Selfridges and felt very odd amongst all the expensive clothes and I caught the end of the Portobello Road Markets! It wasn't a cultured day and It wasn't a event fulled day but it was my kind of Holiday!

Day 4 of London
Well yesterday was definitely an event filled day! I went into London and had a look around the East End at some shops, I bought lots of lovely clothes at this place called the East End Thrift Shop down a passage way called Assembly Passage and I got an amazing coat/cape you can see it in the photos below because after the shopping I met up with Duncan and some other people who were new to London and work colleagues with the girl whose place he was staying at. We meet at Buckingham Palace but because its so cold over here we just had a quick look then wandered down to Trafalgar Square. 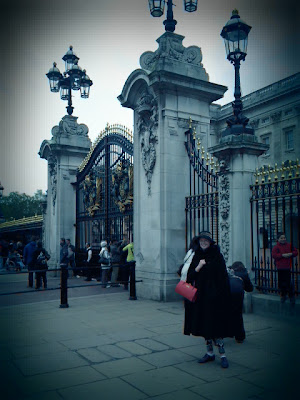 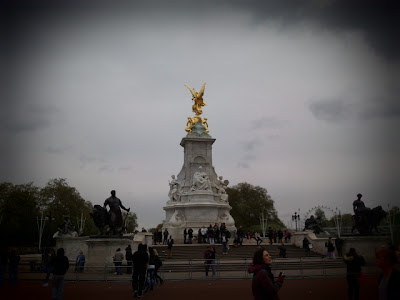 Once we got to Trafalgar Square we then noticed a concert going on and asked a security guard who explained it was an Indian Festival celebrating the New Year. We watched for a little while but got cold pretty quickly so ended up heading to a pub for some food and drinks to warm us up! 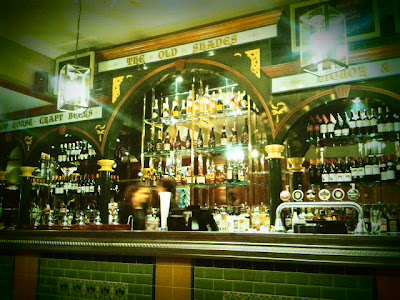 We had a few nice drinks and I tasted a really delicious Strawberry and Pear Cider which I could see myself getting addicted to! We were really wanting Mulled Wine but what we got had alcohol in it so we warmed up pretty quickly!

Once we finished there Duncan asked if we wanted to meet up with Laura who he was staying with at a bar called Walkabout Inn which is apparently an Australian Bar and they have them in Australia also, Kat who was with us and is Australian had never been in one and it sounded from her description to be pretty low class.

Once we made our way there, after asking for directions from a drunken man with a Cockney accent, We saw what Kat was talking about. Wow. I have never experienced anything like it, for anyone who knows what I mean, it was like the Big Kumara in Wellington on Crack.
Because it was a Sunday night and Monday is a public holiday so many people were out but I do think that even if people had work the next day they would probably still get quite drunk. There was a queue outside and then once we got to the front of the queue I realized I didn't have my ID so I left it up to the bouncer but he believed me when I told him I was 23.

Heres some grainy photos of the place


Now I kind of wish I never went because then Duncan and I lost Laura and she went to another Pub that was in Putney (we were in Hammersmith) and because it was late and freezing we couldn't figure out how to get there and we got angry, well I got angry at Duncan, so it felt like a bit of a disaster. It took us ages to finally make our way there and It cost me £25 for the Taxi which didn't even get us to the right place, then we did get there but they were 20 minutes away from closing so we couldn't even get in. Duncan and I finally decided to go back to Laura's where we would both crash on the massive couch, but that took a long time also! We missed the 2:12am bus then waited till 2:42am for the next one, Lucky Bastard Duncan had a nap while we waited, Made our way to another stop where we caught an after midnight bus which was 20 minutes away so we sat at the bus stop with other night time dwellers and then when we got to Laura's we could finally settle down and get warm! Laura was really lovely also she came in about 20 minutes after us and put a sleeping bag over me cause I was using my new coat/cape as a blanket and gave me a pillow.
I had a really good sleep and followed in Duncans footsteps by having water before we slept and water when we woke up. :)

This morning we all woke up and decided to go for a feed at a local pub, I had a really nice Vegetarian sunday roast with a Mushroom and Cashew Wellington (Mushrooms and Cashews and a yummy gravy covered in pastry) and a coffee and apple juice. While the others had a proper sunday roast. 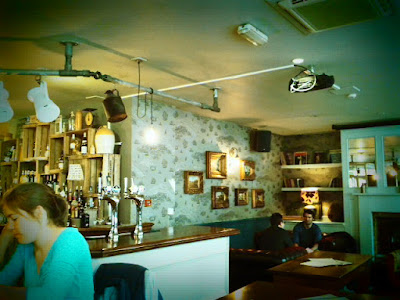 Duncan and I then had to go back to the Victoria and Albert Museum because he had been there with Kat and Ezra (The work colleagues of Laura) and had forgotten his Backpack with all his things in it!
We then made our way to Audreys for a relaxing evening and a delicious Sunday Roast for tea! (I had vegetable stir fry that was leftover from Wagamama instead of Chicken)

Tomorrow is my last full day in London so I'm really going to make the most of it!!!
Posted by Anna Gibb at 2:31 PM